Sphingolipids are an important class of fat molecules for the integrity of cell membranes of all eukaryotes, including us humans, but also as simple organisms as budding yeasts. Therefore, the levels of sphingolipids are tightly controlled, and mismanagement of sphingolipid levels is associated with disease in humans. The probably most important regulation happens on the level of the first step of their synthesis by the enzyme serine-palmitoyl-coenzyme A transferase (SPT), and is carried out by a family of small membrane proteins, called OMRDL proteins, which inhibit enzyme activity. Most organisms have more than one gene coding for these ORMDL family proteins (humans have three and our model organism budding yeast has two). They contribute differently to disease states, yet, it is very unclear why cells need more than one of these proteins.

We have shown previously that the two ORMDL family proteins of budding yeast, Orm1 and Om2, are fundamentally differently regulated (Schmidt et al., 2019, EMBO J.; Schmidt et al., 2020 JBC). They also contribute differently to the homeostatic control of SPT activity and have a different interaction partners. Based on preliminary results, we hypothesize that ORMDL family proteins may have unknown additonal functions beyond their role in SPT regulation. In these research projects we aim to shed light on the functionally different roles of yeast and human ORMDL proteins in the control ofsphingolipid levels and potentially other important membrane components.

Project part 1: Analysis of the interactome of yeast and subsequently mammalian ORMDL family proteins, with special focus on interactors that explain their different localization and contribution to SPT activity.

Project part 2: Analysis of the lipid content (lipidome) of yeast cells with mutatons that mimic the different signaling and trafficking states of the Orm1 and Orm2 proteins and functional correlation with novel interaction partners involved in the metabolism of other lipid classes.

We are a small group imbedded into the department of cell biology of the Biocenter Innsbruck and are looking for a motivated young scientist with an MSc degree (or similar) and a background in molecular biology, genetics and/or biochemistry. We offer a collaborative lab atmosphere and intensive training inmolecular cell biology, protein biochemistry, yeast genetics and life cell imaging. Students will also enroll in the MCBD doctoral program of the Medical University of Innsbruck (added bonus: You’re in the Alps!)

Send your applicaton with CV and the addresses of 2 scientific referees to (deadline 3-31-2023):

In recent years, the view of lysosomes as a cellular garbage disposal system has been extended by data underlying its importance in orchestrating cellular metabolism. Lysosomes are crucial for cell growth, proliferation, differentiation and cell-type specific processes, rendering proper lysosomal function indispensable for cellular homeostasis.

In order to regulate these processes, LAMTOR associates with a number of partners including the Rag-GTPases, SLC38A9, the lysosomal v-ATPase, MEK, BORC, AXIN, LKB1, and many more. We know that some of these associations are mutually exclusive, whereas others occur under the same physiological conditions. We could show in previous work, that phosphorylation of the N-terminus of LAMTOR1 plays a role in regulating these interactions, however the functional trigger(s) for these events and their physiological consequences for the cell remain largely unknown. 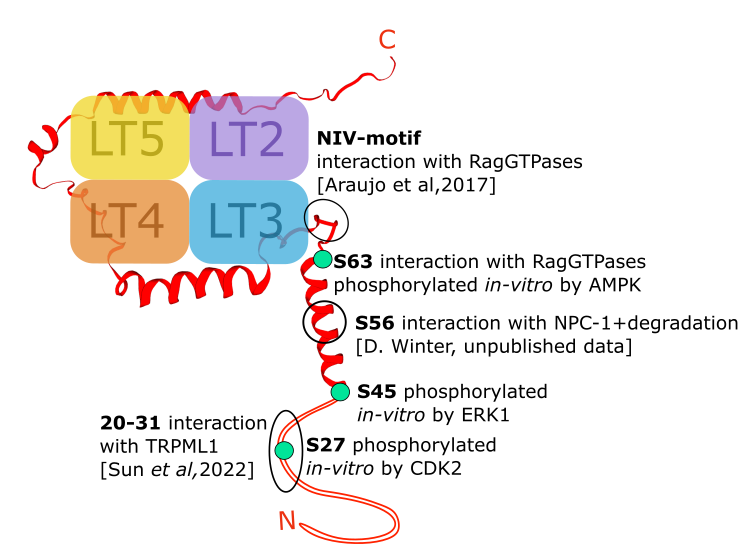 The aim of this Master thesis, is to investigate these phosphorylation sites functionally. A large number of cell lines with different mutations are available for this purpose. Methods to be used include biochemical analysis, high resolution microscopy and basic molecular biology techniques.

Requirements:
We are looking for motivated young scientists to join our lab at the CCB Innsbruck for their Master thesis. We offer a collaborative lab atmosphere and thorough training in molecular cell biology, protein biochemistry and microscopy.

Most organisms have mechanisms for efficiently transitioning between anabolic and catabolic states, allowing them to survive and grow in environments in which nutrient availability is limited. In mammals, an example of such a mechanism is the signaling network coordinated by mTOR (Mechanistic target of rapamycin). Because mTORC1 triggers a rather resource-intensive anabolic program (growth/mass accumulation and proliferation), cells have evolved mechanisms to ensure that it becomes active only when sufficient resources are available. As such, lysosomal mTORC1 is activated as a coordinated response to amino acids, cholesterol and glucose availability. Despite decades of research, we are only now beginning to unravel the intricate cascade of events that control this cellular gatekeeper.

GATOR and KICSTOR components) result in a collection of neurodevelopmental disorders commonly known as mTORopathies. These diseases can affect multiple organs, but all have distinct neurological clinical presentations, including mental retardation, autism, and epilepsy.

Despite the mentioned similarities, there are obvious differences between the identified mTORopathies and it remains unclear if these arise from the degree of mTOR hyperactivation or if other deregulated pathways also contribute to the specific phenotypes 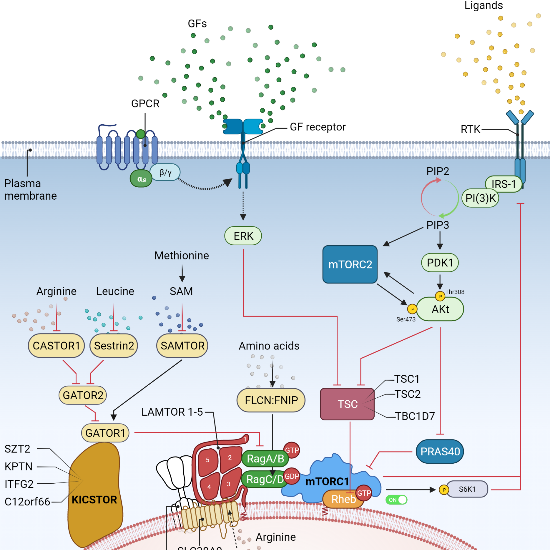 The aim of this project is, to perform a detailed comparative characterization of patient fibroblasts with mutations in different mTOR regulators. The analysis will include biochemical, molecular biology and fluorescence imaging methods.

Requirements:
We are looking for a highly motivated student with an interest in understanding the pathological mechanisms underlying rare human diseases. We offer a collaborative lab atmosphere and thorough training in molecular cell biology, protein biochemistry and microscopy.